As an Indian, do we know when the country celebrates its Armed Forces Flag Day or the Flag Day of India? Do we know what the day is celebrated in India for? Sadly, most of us are not aware about it.
But, there is one Indian out there who wants to ­­raise awareness about this significant day on his bicycle.

To begin with, The Armed Forces Day is a day dedicated to India towards the collection of funds from people of India for the welfare of the Indian Armed Forces personnel. This day is observed annually in India on December 7 since 1949. Over the years, it has become a tradition to commemorate this day as an honour to the soldiers, sailors and airmen of India.

Lieutenant Commander Manoj Gupta of Indian Naval Academy, Ezhimala is on a mission on his bicycle to spread awareness about Armed Forces Flag Day. He aims to raise funds for the widows of jawans, a family of jawans who died on duty and those jawans who become disabled on duty.

The 30-year-old lieutenant commander is a native of Mumbai. He started his solo cycle expedition from Khardung-La pass in Leh in Kashmir on the June 6th  and plans to complete the expedition on July 16th 2018 in Kanyakumari of Tamil Nadu and will cover over 4,000 kilometres. 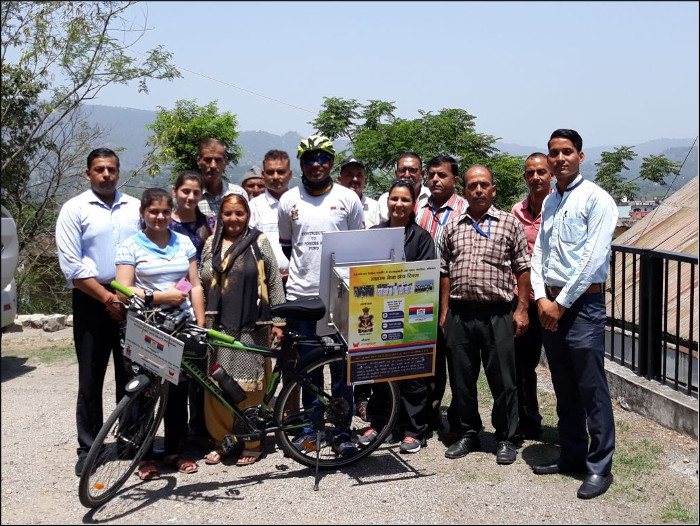 Before setting out on this expedition, Lieutenant Commander Manoj Gupta practised cycling for nearly 4 months.

This humble vehicle has surely the power to spark a change.

We are proud of our Navy Officer Manoj Gupta and wish him all the best for his endeavour!

What Does Cycling Mean To You?