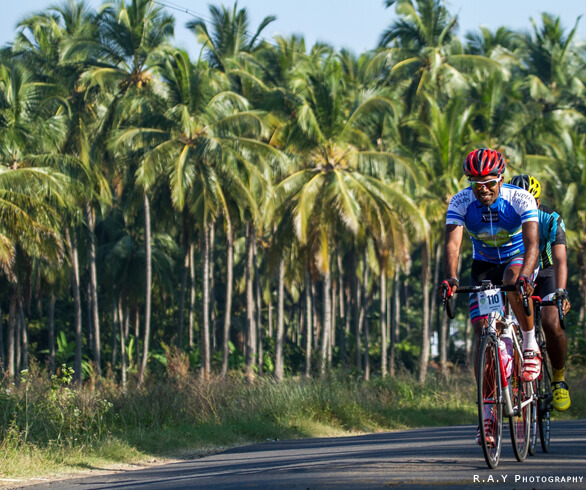 As we move on towards the end of the tour, a sense of accomplishment among the riders could be noticed easily. With one day left for the tour to end, riders pedaled the 108 km route moving towards the last competitive segment before the get home for New Year celebrations. They will be riding through vast stretches of coconut fields starting from gods own country and then entering Tamil Nadu via Valparai.

As we resumed our journey with the riders after flag off, we passed numerous Todi shops. (Todi is also known as Indian beer and is drunk at the end of the day after it is highly fermented.) Besides, we even passed small villages and towns that are homes to various families. With Kalpavriksha and palm baugs on either side, finding a coconut or a Todi vendor on the road was relatively easy. As a result, the riders could stop wherever they wished and relished some tender coconut water. The natural isotonic drink provides a formula that consists of electrolytes such as calcium, phosphorus, sodium, potassium and more that are present in a sports drink as well.

As we moved further the dawn got alive, small shops raised their shutters, school kids waited for public transport, workers walked their way to their respective fields. One the overall, life moved on as the riders engulfed the cool and calm morning until it turned into the usual blistering climate. The now and then water bodies were much welcomed as everyone took their sweet time clicking pictures. It was good to see riders hailing from different parts of the globe riding together as one.

Soaking our minds in the tranquil weather, we moved on towards Support station 2.  On our way, we saw plenty of cyclists, who looked happy and satisfied. Their expressions were enough to signify that they were truly enjoying the ride. After covering some more distance, the riders reached the base right next to Aliyar Dam which was also the start point for the competitive section. As this was the last competitive segments of the tour, it was their only chance to improve their GC standings.

At the start point of the competitive segment, we noticed many cyclists resting right next to the dam that offered a spectacular view. Once they were prepared, the riders stood up for the final assault to tame the picturesque Valparai. Situated at 3,500 feet above sea level with 40 hairpin loops the stunning mountain offered a clear view with every pedal. Besides, it’s been a home to animals such as elephants, boars, lion-tailed macaques, gaur, spotted deer, Sambar, and giant squirrels.

Once the journey started, they had to ride through narrow gradients of Valparai between trees that offered a good amount of cover. As the competitive segment progressed, we too rose upwards and had the most fabulous meal at the end of the 12 km competitive segment. Many cyclists gave a break to the usual hotel meal and relished a heavy fish meal before resuming the journey. The fried fish fetched from the Aliyar dam along with Rasam, Rice, Papad and other South Indian cuisine was something that no one could afford to miss.

After topping up our meals with a cup of special chai, we carried on with our journey and reached the top of Valparai.  Throughout our ride, we noticed a dramatically changing landscape transitioning from bushes to tall trees to tea plantations. Seated here, we could also scan the entire group of the mountain below our feet. The lush green blanket with mountains perfectly complimented the clear blue sky overhead. Soon the haunted place where were could hear the wind screaming, welcomed the cyclists. As soon as the cyclists saw the view from the top, all their pains and worries subsided, at least until the moment they decided to move again. We waited here for long hours until the sun started to sink behind us and the wind got wilder and colder. Cyclists arrived, soaked in the scenery, clicked pictures and moved on before the fall prey to the growing harsh cold wind. The view is one of a kind and, after all, the hard work put in for the past seven days, we truly feel that they have earned it. What better prize can you think of than the awe-inspiring views embossed in their minds as memory?

We could hear the insects blurting songs of happiness as the plants and tiny shrubs swayed flowers of whites, purple, pink and orange. The local cows munched on some greens by the edge of the road, while the birds chirped their favorite tune.  The colorful butterflies seemed to be tripping on the cool weather and so was the dead grass that managed to feel alive in the chilly winds.

Valparai offers a sight that cannot be missed and so, we tried to make the best of it. The network free zone guarantees to clear your mind from the daily hassle. As the on and off traffic did disturb us, we still found it easy to get lost in the moment again.

Good things do have to come to an end and so we decided to move on with our journey to the hotel. After covering some more distance on our Jeep, we reached the hotel and were reunited with 100 tired cyclists. When we asked them about the route today, this is what they had to say. The route is the most beautiful we have come across so far and the markers are doing a splendid job.  In case, if you want to know the way, all you needed to do is look on the road. Also, we hope the photographers Yogan, Raj and Adarsh are able to capture some stunning shots.

Kurush Wadia from Mumbai stated that he wouldn’t mind coming next year with his wife for the tour of Nilgiris. He also added that the event is so well managed that the organizers have thought through the smallest areas and made life easy for all of us. What more could we ask for?

What’s in for tomorrow?

The last day of the tour takes off from Valparai and ends at Pollachi. Most of the ride is downhill and the total distance that the riders will be covering is around 74 km. There are higher chances of tomorrows ride being a team time trial. Crossing Aliyar it would be a fast-paced ride to Pollachi where the tour will wind up.