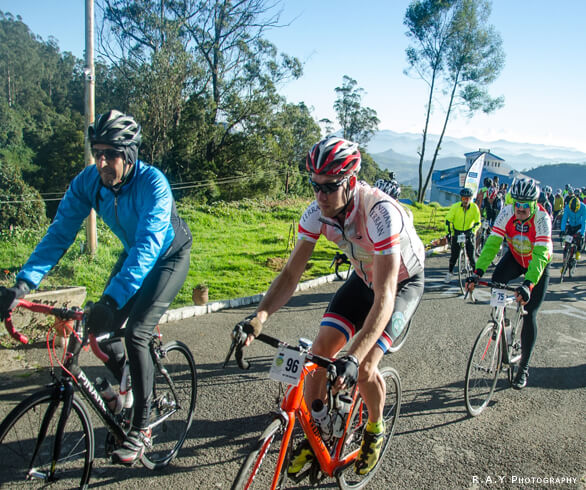 With no competitive section on day 5 of the Indian terrain Tour of Nilgiris 2015, riders were in for a treat. After resting and refueling their tired muscles at the luxurious and comforting Highway Hotel Accord, Ooty, they were about to experience the best downhill of their lives. Before flag off the 100 riders were enlightened by the current leader and two-time winner with some vital downhill tips. This was followed by flag off that led the riders to the mouth of the breathtaking descend.

As the riders took their sweet time to descend they were numbed by the cool breeze hitting their face, fingers, and other body parts. However, the breathtaking view of never ending tea plantations kept their minds occupied. As the riders drop lower with caution, the sky got clearer and the temperature got warmer. We saw a number of cyclists stopping by to soak in the beauty of the scenic view. Smiles were inevitable as they all captured memories in their handheld devices.

The cyclists were scattered across a vast distance. With no competitive segment, they had nothing to worry about. They could ride carefree without worrying about hydration and other issues. On their way, they saw dozens of monkeys that delivered some form of entertainment. While descending, some riders were fast, some were average while the others braked their way down. With plenty of technical turns, they had to be careful and not get carried away.

Once the descent was done, the Indian terrain tour of Nilgiris route guided them through small villages that left numerous bystanders curious. It’s a rare scenario for locals to watch Lycra-clad cyclists riding their bikes across their usual routine. As the rider’s touchdown the base of the climb, they begin their journey on flat boulevards. Besides, the heat started building gradually that stung them through their clothes.

After riding a couple of kilometers, the tour of Nilgiris riders entered the popular and quite ‘Village Safari’. The narrow single road offered enough space for a cyclist and a car to pass by simultaneously. Bits and pieces of the road were under construction while certain other chunks were dug up and rebuilt. This didn’t bother many as they all had to mandatorily ride to the other side. The mix of coconut and betel baugs can only be found in the southern terrain of India and were an instant hit among riders. Also, the on and off water bodies were treasured as well.

As the riders rode further, they immediately hit the Highway that led them towards the famous coffee shop – Kumbakonam Degree Filter Coffee. The shop is a favorite among people skipping the Tamil Nadu boundary and entering Kerala or vice versa. However, for the Indian Terrain Tour of Nilgiris cyclists, this coffee shop is mandatory halt. With Support station 4 right next door, riders did not hesitate and squeezed their brakes to relish the best coffee the trip had to offer. People come and go, but very few know the history behind the store or how it even got so well known. What drives people to the small coffee shop is that the coffee served to customers here is free of chicory that makes the coffee extra flavored. In case, if you are a coffee lover and happen to come here, you are sure to fall in love with the taste. Having just a cup will only do injustice to you and your cravings.

As we enjoyed some coffee at the shop with a handful of riders, organizers and volunteers we happened to interact a lot. That’s when we heard some interesting stories that left us stunned. Take a look at the top two favorites listed below:

Nils Eigil Bradtberg – With downhill at the start there was no chance for the R.A.Y photographers to catch him and click some good pictures. As a result, the photographers didn’t even try to catch him. Within a matter of 4 hours, Nils and other few fast riders had sprinted ahead of the markers. Markers are volunteers who start off their journey before dawn to mark the direction on the roads. Following these arrows solely, riders can navigate their way from the start point to the finish point.

Before the markers were done for the day, Nils had already caught up with them at Support station 3. Right behind him, a chase was put up by Viju Varghese and Gaurav who managed to catch him, but failed to hold on. Eventually, Nils sprinted to the hotel while the duo lost their way. While the leaders reached the hotel by mid-day there were dozens of others making their way to the next support stations.

The heat was building, the traffic was alive. Navigating and keeping an eye on the arrows was a task at some places. With at least a 100 km spread over a flat surface, riders were scattered across the entire TfN route.  This made it difficult for them to stay focused as well as alert. A simple miss of arrows would lead them into nowhere. This did happen with a few riders who pedaled a good 10 to 15 km in the wrong way until the GPS devices on their bikes tracked them and a biker was sent to his rescue.

We also spoke to a few riders asking them about how they find the tour and today’s day especially. Many of them stated that the route was lovely. The downhill followed by the flat route rolling through scenic view made it interesting. The heat too was pretty bearable as the massive trees in certain places served as a shade for us.  Some even stated that the tour is well managed and the volunteers are doing a pretty good job. Especially, the markers who wake up early to mark the route for us truly deserve a special applause.

We spoke to Rishi Kar, from Mumbai, who loves riding at the back, but with a plan. He stated that “the beauty of riding behind cannot be measured as you have the freedom to ride the way you like. There is no pressure at all as your only goal is to complete the tour. You can stop whenever you want, have whatever you wish and even encouraged others who need a push.  So if you think this tour is meant for racing, you are mistaken. Cyclists who love touring can extract a lot as far as they can climb and sit on the saddle for hours.

So in case, if you are an avid cyclist and  are looking for an adventure, the tour is the right place to begin.

Tour of Nilgiris: The Kalhatti Climb