In the good old days just like every other kid next door, my friends and I used to rent bicycles from a local store. At times, we were required to wait for 15-20 minutes at the local bicycle store just so we could rent our favourite cycle.  Then, we would spend endless hours in the bylanes during our school vacation mastering the art of cycling. Initially, none of us was able to ride the cycle but with the help of each other, we eventually got a hang of it. Falling off the cycle a few times were lessons we learned before we started to fly on our bicycles.

As a child, my parents wanted everyone in the house to wake up early. That’s when my parents assigned me the job of distributing newspapers for which I made use of the ‘Ghoda Cycle’. As I was just a kid, the ‘Ghoda Cycle’ was way big in size and riding it was a task. However, I didn’t give up. I learnt a unique way to ride the cycle, i.e to put the right leg in the frame and start pedaling without being able to sit on the saddle.

I enjoyed this phase of my life to the fullest. As I grew up, slowly I started riding the same cycle to school and even to college. The distance started increasing and riding in lanes changed to riding on the main roads. It felt like an achievement in those days. I even used to go swimming at Shivaji Park, and so cycling from Antop hill to Shivaji Park continued for 7 years.

But as time passed, I could not keep up with this hobby of mine as I had to take up responsibilities and think about my professional career as well. This was the time when cycling had to take a backseat and I was not able to ride for a long period of time.

Soon, I got a job and achieved financial stability. It was a big relief for me as I had a source of steady income. But that’s not it. Life had bigger plans in store. That’s when I got introduced to trekking by my friends and my interest only grew. After cycling, I found happiness in the mountains. Here, I met new people, made new friends at the Trek’s that I did on weekends.

And just during one of those trekking weekend, life changed. From one such friend of mine, I came to know about the Mumbai to Goa cycling expedition organized by the YHAI- Mumbai. Hearing the adventures of Mumbai-Goa the spark of riding my bicycle was ignited again within.  I had no idea life would get me back to cycling. 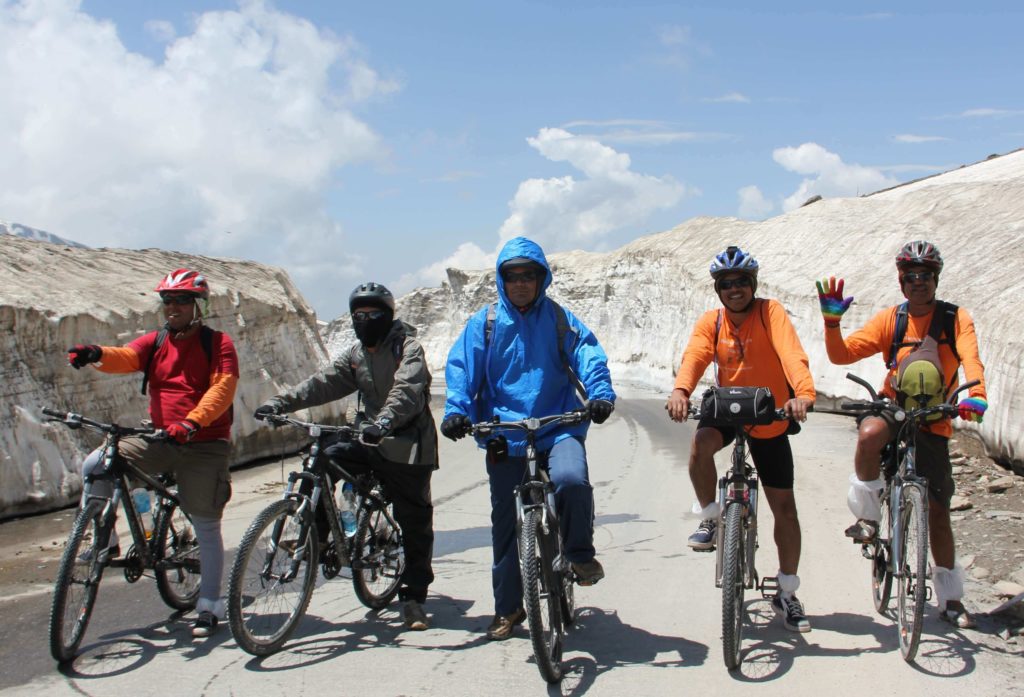 So along with 32 other participants, we left from Goa on brand new mountain bikes – Trek 3700. For the first time in my life, I had seen a geared bike. This was my first major cycling expedition ever and I couldn’t wait to experience the scenic coastal highway which is known to be very beautiful. Those of you who have been there, will know!

As the tour progressed, we started understanding the finer details of the bike.  The credit of successful completion of this expedition goes to Ashish Agashe  and Swapnil Ghadigaonkar who were our leaders on the trip. Both of them taught us a lot of things related to cycling. It made a huge difference to our cycling during and after the trip.

After the Mumbai-Goa expedition, I purchased a new bike, Trek 4300 MTB, thus, began a cycling journey which continues to take me to places.  With the new bike, I started riding regularly on the roads of Mumbai. Riding on Marine Drive and Worli Sea face became a tradition. Sundays was for longer rides mainly on EEH or Ghodbunder road. Life was just perfect.

While there was certainly some monotony after some point of time, I came to a point where I craved for something different and new.

Not only me, some of my friends in the same circle had the same question. That’s when the five of us decided to get together and plan. 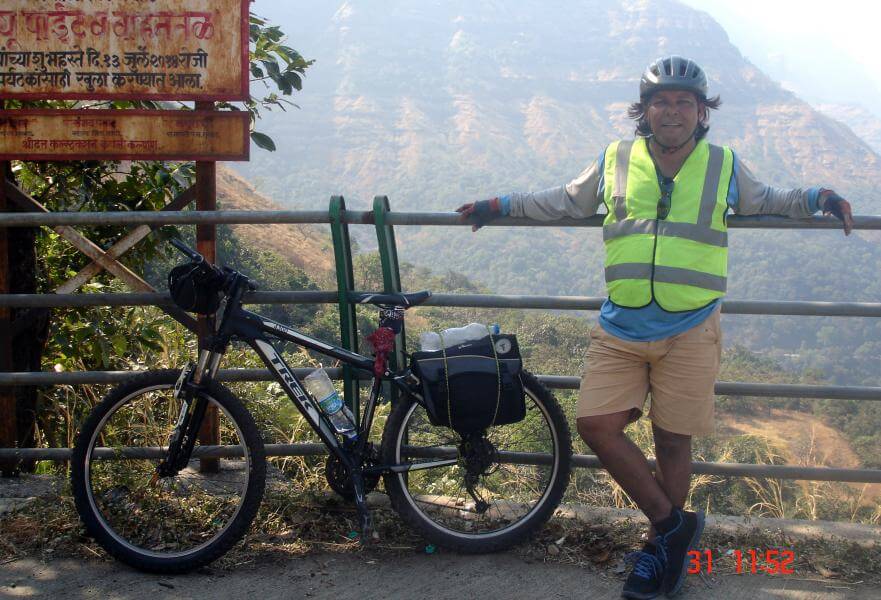 On June 2012, we five friends set out on our bikes from Manali – Leh and upto Khardungla in Ladakh. This ride is considered to be challenging from terrain and altitude point of view.  On our way, we met a lot of motorcyclists who were amazed to see us cycling where they struggled to ride an Enfield. On the way, we also met a foreigner couple who happened to be cyclists. They gave us new insights into the cycling world abroad.  They told us about panniers, padded shorts, head lamps or tail lamps, speedometer and more. All this was very new to us.

If you didn’t know, getting your hang on these accessories in India was very rare. Even if you did manage to find the right shop, the accessories would be very expensive.

Finally, with super awesome memories this expedition ended and we returned home with a bit of maturity in cycling and touring. 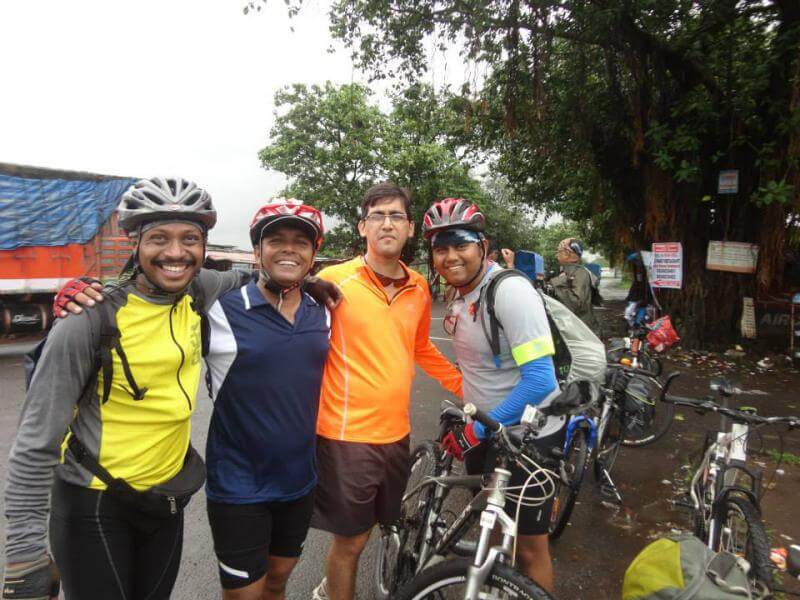 On reaching Mumbai, I got in touch with a friend of mine who lives in Canada and enquired about all the things that I had heard from the couple we met in Ladakh. To my surprise, the same friend simply sent everything to me via courier. It was one of the best surprises ever!

In the same year in December 2012, my friends and I did Panjim to Kanyakumari 1200 kms expedition. This time, it was with the panniers and other cycling accessories that I had received from my friend from Canada.

In December 2015, we rode from Jammu to Jaisalmer covering a distance of 1150 kms. During this trip, we passed through 4 states and visited 4 border check posts. Tourists generally visit the Wagha border, but there are many more border check posts which people don’t know about. One such border check post was the Hussaini wala border. Many local residents, as well as the army Jawans, were really impressed by the fact that we had come so far away on our bicycles and the fact that we were carrying our own luggage was something which the locals had never seen before. At one such post, we met a major posted on duty and handed over to him a greeting card made by us.

In March 2016, I did a solo expedition from Mumbai to Goa.  As I started pedaling, I got engrossed in my own thoughts and I was lost with my bike. After all these tours mentioned above, this was my first solo cycling experience. Unlike before, this time I didn’t take the coastal route but preferred the NH17. The experience of a solo tour is completely different and it teaches you a lot.  At the end of the day, you are tired and can’t stop thinking about the day that passed by. When riding alone, you have to fight with yourself and be extra cautious.

There will also be times when you will have to push yourself to your limits. Don’t be surprised if you find yourself fighting a battle with your mind. Just go with the flow and enjoy every moment.

Apart from big expeditions, I have done a lot of cycling around Mumbai as well. This comprises typically of 2 or 3 days. Bhandardara circuit, Pavna Dam circuit, Mulshi dam circuit, Pimpaljoga dam circuit, Manikdoha circuit, Malshej ghat, Bhor ghat, Kasara ghat, Mahabaleshwar ghat are some of the routes that I can recall while I frame this write-up.

If you haven’t noticed, the complete west coast of India is done, now the east coast looks tempting. Out of that Kolkata to Vishakhapatnam i.e 900 kms is already done in December 2016.

I’m already thinking about doing the rest in the coming years.

Our nation is so vast and diverse that covering the entire length and the breadth might seem to be difficult. But that doesn’t stop me. I wish to traverse from East to West and North to South on my beloved cycle. That is the best way to see the country.

Cycling gives me an immense sense of satisfaction and the pleasure derived from it is beyond words.

My only prayer to God is to allow me to ride my bike till the last day of my life.

Special thanks to Vijay Beladkar